A Continent in Search of Expression / Spring 2015

As part of the Survey of Latin American Art program, from 1870 to part, taught at the United States Brandeis University on spring 2015, this course will survey the art of Latin America since the early 1900s ̽when the first solid proposals for “native expression” of the continent started to be develo- ped̾until the late 1990s, when the first Latin American artist considered to be a “global master”, Mexican Gabriel Orozco, emerges in the international contempo- rary scene. Thus, the course will familiarize students with the work of leading Latin American artists active in their native countries and abroad, in addition to major developments such as the rise of abstraction, conceptualism, and postmoder-nism. We will also explore significant issues that have shaped the production and reception of the region’s art, considering, for example, strategies used by Latin American artists to resist or reinterpret artistic discourses, negotiating local and international trends. 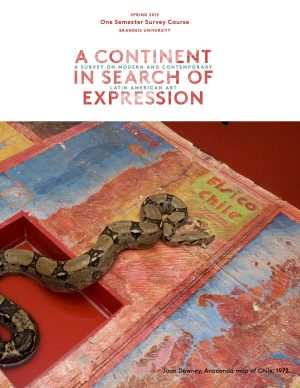