As part of the Specialized Advanced Courses in Latin America program, taught at the United States Brandeis University on spring 2016, this course is an invitation to think about a significant absence ̽and a speculation: despite the marvelous scenery, breathtaking natural surroundings and endless natural resources, the notion of “landscape” itself might be the most foreign of all in Latin America culture. To put it bluntly: if one can attest that Latin America has existed for almost five hundred years (since first contact in 1492), its first authentic “lands- capes” (that show a critical departure from the academic mold inherited from the European tradition) did not appear until late into the XIX century and, if one gets really strict, it will not be until the 1910s were one could detect the first original takes in the tradition (in Alejandro Reverón’s work). The fact is that Latin America had no “landscape” during the Spanish and Portuguese Colonial times, for which for almost four centuries out of the five in which the region has existed, there have not been meaningful, original descriptions of the territory̾whereas verbal accounts or visual depictions̾produced by their very own people. In brief: What does it mean to establish a culture without an idea of landscape? Is that even possible? And if possible, what does that mean for Latin American culture? 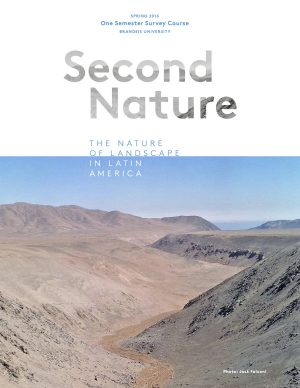